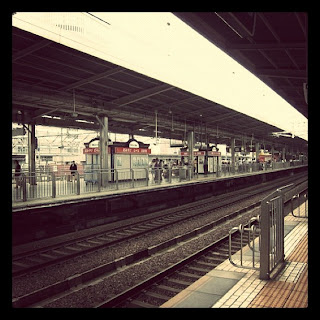 Today I’ll be sharing a tiny bitsy piece of story of my everyday life here.

Well, as you might know already in JAPAN, trains are the best transportation here though we think cars are the best back there. (I miss driving)>_<

I have been hopping into trains to and fro from University every morning during rush hours and here are some bitsy things I would like to share.

I don’t know how should I describe them as during that RUSH HOUR. They are really different other than that time. During RUSH HOUR, you might see a little of unity?!~Should I use that “Unity” word here, I wonder!

Everyone queues up in line by standing behind the yellow line (safe zone). There’s about 4 lines and it will be a very long queue at every line. From my experience, if you’re standing on the 4th or more behind, you definitely won’t get a place to sit and get ready to get crush at every stop as more people are squeezing in even when there’s no more space to breath!

When I say UNITY, it happens whenever they see the train arriving and everyone will step forward at the same time, very close to the gate/door of the train getting ready to fight for a sit! Once the door of the train opens, everyone rushes in with their eyes aiming for the sit. You’ll see that HAPPY/RELIEVED faces of those who manage to grab a sit.

In the train, you’ll see them either sleeping or on their iPod/phones but mostly in the morning, everyone is on the sleeping mode. They can even stand and sleep without falling down.~So well trained eh!! I always wonder, are they that tired that they wouldn’t even care about their image whenever they sleep in the train where girls will wake up with a messy hair as their head float around from left to right.

After 3 weeks of attempts, on MONDAY I finally managed to grab a sit and that’s when I realized how they felt when they got a sit and having that HAPPY or RELIEVED feeling in them.~lol
To be honest, I’ve been trying to grab a sit everytime during that rush hour but never once succeeded not until MONDAY!~I was so happy that I don’t have to stand and get crushed by those working people!

This is how it’s like in JAPAN during RUSH HOUR on trains.
Everyone is just afraid of being late for work.
‘Being on time is just part of their culture’!
So if you’re a person who is never on time, you might have trouble living in this country but it might be a good thing/ good opportunity for you to change too.